Before I began my career as a nurse, I worked as a preschool teacher (and I still wanted children!). I said things like “use your walking feet“, “teeth are for smiling and eating apples but not biting our friends” and my personal favorite “use your words“.  I find myself using similar sayings even now when speaking to my children and sometimes even with my patients.   However, I never thought twice about requesting a child to use their words, until I realized that my son might have difficulties forming and using his own words.

The idea that I may not hear the word “mama” uttered from his sweet little mouth until he was quite a bit older made my heart ache a bit. I could remember vividly when my daughter, still small enough to be in her pack-n-play, woke up in the middle of the night to nurse.  She requested in a small but almost desperate tone for “Mama”. My husband looked startled, and asked me if I had heard that.

I had heard it, and was almost in tears, because I had heard much more than those two little syllables. I had heard, “I love you, I need you, I know who you are and you have earned the right to be called my mama”. Okay, so most of that was probably the sleep deprivation that our daughter imposed on us with her insistence on not sleeping. EVER. But there is something so special about  BEING mama for your child for the first time. 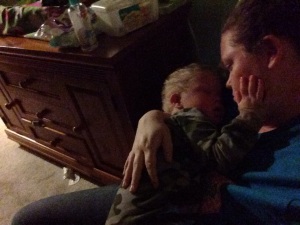 Fast forward a couple of years and I found myself with a different little one in the same pack-n-play in our room. One particular night I sat staring at his little swaddled form and wondering, when will I be “Mama” to him. What I found over the next few months is that “Mama” sounded different when said from Gabe. To him “Mama” was outstretched hands and a giant soggy grin. It was a speed crawl with head tucked under for maximum efficiency directly to my ankles. It was a wobbly walk along the furniture to be wherever I was, just so he could place his chubby hand softly on my knee and look up at me with such adoration in his eyes that it could make my stomach flip flop. Currently, it’s a blonde hair, blue eyed toddler, pulling at my tshirt hem, and saying “Ah-Mee” in his tiny toddler voice.

You see sometimes communication looks or sounds different that what we expect. For most, communication consists of the words that we can hear. The understandable things that are spoken from ones mouth to another’s ear. For some it could be their hands that communicate for them, allowing them to share their desires and appreciation. For others, it could be written word, or touch to speak apps, or taking you by the hand and showing you what they mean. The important thing to know is that communication can take on a variety of forms. It’s imperitive that we take the time to recognize that despite what you might or might not hear uttered from someone’s mouth, what they have to say is just as important to them as what you have to say is to you.

I challenge you to just take a moment the next time that you have the opportunity to meet someone who’s style of communication seems different than yours, to stop and HEAR what they’re trying to say.  It may take a little extra time for them to share it with you, but I’m almost certain that it will be worth it.