According to the Humane Society website there are just over 78 million dogs as pets in the United States. 38 percent of American households own at least one dog. The two dogs that we have put us into the 28 percent that own two dogs. Kia, is an epileptic beagle, and Mya is snobby and chronically miserable, but they are just as important to us as any other member of the family.

I personally feel that pets are a terrific tool for teaching responsibility, gentleness, and can be a great motivating force. Sister helps to fill the dog bowls and feed the “puppies”. She enjoys walking Mya and asks frequently to take them. All in all, I would say, she “loves” her dogs. However, love can be a dangerous thing. On more than one occasion I have had to rescue one or both of the dogs from the shenanigans of Sister and today proved to no different.

Upon returning to the house from a leisurely walk with the dogs and two kids, I set about unloading the dishwasher. Sister grabbed a couple of plastic spoons and went off to “cook” dinner on her play kitchen in her room. I turned the dishwasher on and set about tidying up the living room. I took some toys to Sister’s room, grabbed a “bite” of dinner and almost broke my neck tripping over the dog passed out in the hallway. I rubbed my shin and glared at her, the thought that she had strategically placed herself in my path as payback for letting Sister drag her around by her leash, flitted through my brain.

I threw in a load of clothes and sat down in front of Brother’s bouncy seat for a little play time. In the midst of a full blown belly laugh I could hear a faint, but repetitive banging. I headed to the laundry room to check that the washer wasn’t out of balance and was surprised to find that wasn’t the source of the noise. I rounded corner to Sister’s room and noticed the dog had vacated the premises and the door was shut. The banging got louder as I got closer. I reached for the door handle and heard My daughter grunt and say, “If you’d just stop resisting….” (This is something I have said on numerous occasions to her and her brother in the midst of a diaper struggle or clothes tussle.)

I swung open the door and both my daughter and the dog froze in surprise. Chef Sister was attempting to cram 30 pounds of wiggling, flailing, beagle into a 6 centimeter square that made up her “oven”. She looked up at me with innocent eyes and grinned.

“Um, Peanut, why are you shoving Kia into the oven” Kia wagged her tail at the voice of her savior. Sister, still gripping the dogs hindquarters, sighed and responded in an exasperated tone, “I want hot dogs”.

Upon those words Kia began to struggle again, possibly fearing for her life or more than likely the teeny tiny box encasing her head was running out of oxygen. I am not sure if the dog’s head became swollen while entrapped, if Sister used much more force than humanly possibly, or if the oven doubled as a Chinese dog trap, but all the epileptic beagle was able to do was drag the kitchen away from the wall.

The sudden and abrupt jerking of the kitchen propelled all of the items off and onto the floor causing an incredible crash, an angry shout of “my dinner” from The Chef and an increase in spastic thrashing from “dinner”. Fearing for all involved, I knelt over the dog trapping her between my knees, leaned into the kitchen, grasped the collar and jerked with all my might. The dog and I tumbled backwards pulling the plastic cookery down on top of us.

Now free, the “entree” bolted out of the room to seek refuge under the bed. I helped Abi clean up the room and explained to her that hot dogs were not really made from dogs, and that we don’t put our pets, friends and, just for good measure, brothers in the oven. She nodded in understanding and as we left her room said she was hungry. I saw Kia emerging from her hiding spot as I asked her what she wanted, “hot dogs” she replied. One glance towards Kia’s frantically retreating backside let me know that she was not in the mood for hotdogs. 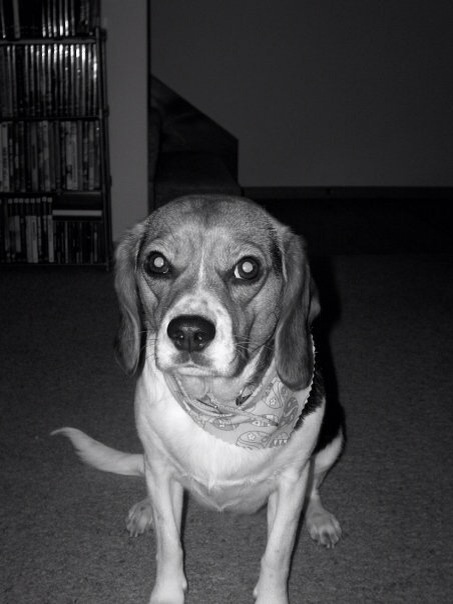